A natural Phosphorus-containing Protein found in Milk. Casein is composed of the following major amino acids: Glutamic acid (20.2%), proline (13.2%), aspartic acid (6.1%), Leucine (9.0%), Lysine (6.7%), valine (7.2%), tyrosine (5.5%), isoleucine (6.0%), and phenylalanine (5.1%) with no measurable amounts of Hydroxyproline (Mills and White 1994). It has been used as a Glue and binder since earliest recorded periods. Casein curds form naturally as milk sours, but it is also precipitated by adding dilute Hydrochloric acid to hot skim milk. The curds are collected, washed and dried to form a white to yellowish powder. The dried casein is insoluble in water and alcohol but is soluble in carbonates and other alkaline solutions. For use, casein is soaked overnight in a solution with a weak alkali (Ammonium carbonate, Borax, or Lime) to form a clear, viscous solution. Solutions of casein are used as adhesives and as paint binders in casein colors and architectural paints. In the late 19th century, casein was made into a plastic by treatment with formaldehyde. Casein plastics were used for small items such as buttons, beads, buckles, combs, cutlery handles, and knitting needles. They were often pigmented to simulate Ivory, Horn, or Tortoiseshell. 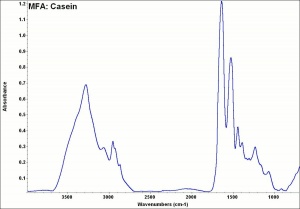 May yellow with time. Susceptible to microbiological attack.

Insoluble in water or ethanol when dry. Soluble in strong alkalis and ammonium hydroxide. Impervious to most modern paint strippers. Density = 1.259 (dry)