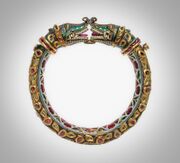 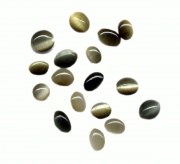 A semiprecious Gemstone composed of Quartz that contains a band of parallel fibers. When cut and polished as a Cabochon, the band produces an opalescent light reflection that appears to move across the convex polished surface of the stone as it is rotated. This effect is called chatoyancy. Cat's eyes are usually a pale yellow or greenish color. A dark golden yellow cat's eye from South Africa is known as a tiger's eye or African cat's eye. It is a quartz stone with oriented fibers of crocicolite. True cat's eye is a variety of quartz, but other stones can also show this effect, such as chrysoberyl (oriental cat's eye), chalcedony, tourmaline, scapolite, cordierite, orthoclase, albite, willimanite and beryl. Corundum has an imperfect chatoyancy which produces a star effect rather than a line. 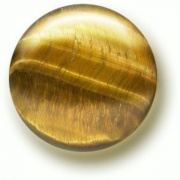