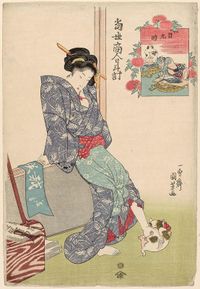 Madder 茜(akane): A red dye extracted from the roots of any of several species of the genus Rubia. The most commonly used plants include: Rubia tinctorum L., native to the Middle East and eastern Mediterranean; Rubia cordifolia L., native to India and Southeast Asia; and Rubia akane Nagai, found in East Asia. It is currently unknown which species was used for ukiyo-e prints.

Similar to safflower, madder can range from pink to a deep red. Madder and safflower are the most commonly found red before the introduction of aniline dyes in the 1860's. Safflower and madder are found as a single colorant or as a mixture of the two. Although the visual difference between red safflower or madder used alone and a mixture of the two is currently difficult to discern, madder may have been used to extend the safflower, which was known to be expensive. In some prints from the mid-1800's, vermilion was also mixed with madder. The pink color of madder also appears opaque when compared to the ethereal pink of safflower. The opacity of pink madder may indicate that the colorant may have been laked onto a mineral white, such as calcium carbonate during its formulation.

Although not traditionally listed as a printing colorant thought to have been used for Japanese woodblock printing, madder has been detected extensively in our analysis. Research of red colorants is ongoing.

Examples of Madder in Ukiyo-e Prints

Add Beauties of the Yoshiwara, madder

Other Images of Madder

Below is a list of prints where madder was detected.

The following 81 pages are in this category, out of 81 total.