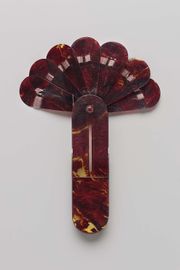 Some of the earliest synthetic resins were made from cellulose fibers. Cellulose nitrate was initially discovered by Henri Braconnot in 1833 (named xyloidine) and again in 1838 by Théophile-Jules Pelouze (named nitrimidine) when each man combined cellulose with nitric acid. The material was patented in 1846 by two other chemists and was initially used as an explosive (gun cotton). Nitrocellulose was developed for use as a plastic, when the chemistry was modified to control the degree of substitution (number of nitro groups on the chain). It was marketed in the U.S. as Celluloid, a proprietary mixture of cellulose nitrate with Camphor added as a plasticizer. Celluloid was molded into numerous shapes such as piano keys, billiard balls, ping pong balls, dolls, buttons and boxes. It was used to make inexpensive objects and decorations that imitated the appearance of Ivory, Amber, Carnelian, Coral, Seashell and Tortoiseshell. Cellulose nitrate was also used for photographic film (from the 1880s to 1920s) and animated drawing cels. Because of its instability, its use for cinematography was limited in 1912 and banned in 1951. In the early 20th century, cellulose nitrate was often used for clear lacquers, fabric dopes, adhesives, and high-gloss paints. During the 1940s and 50s, cellulose nitrate was commercially sold in mixed with natural resins (Dammar, Shellac, Copal, etc) as a waterproof varnish. Cellulose nitrate is inherently unstable and slowly decomposes at room temperature; its degradation is accelerated in the presence of ultraviolet light, heat, and/or high humidity. In spite of this, cellulose nitrate is still added to adhesives, coatings, and explosives; it is occasionally used in conservation as a coating for silver objects. 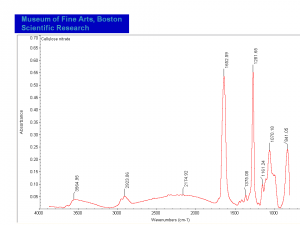 Highly flammable. It can easily be ignited and burns rapidly with intense heat. Emits toxic fumes when it’s burning [1]. There is also an explosion risk.

With degradation, the pieces will exhibit cracking blistering, weeping, and fogging.

Soluble in ketones, esters, and ether alcohol mixtures. Insoluble in water, ethanol, and hydrocarbons. Burns with a bright, violent flame; smells of nitrogen oxides. It does not produce an electical charge when rubbed with silk.