The soft, supple yellow leather prepared from the skin of the chamois goats native to the Alps. Chamois leather was originally tanned with cod liver oil. It can be soaked in hot water and dried, but still remain soft and supple. Chamois is used for clothing and as blending, erasing and polishing cloths. Modern chamois leathers are prepared from inner side of sheepskins or lambskins. To use the name chamois, they must be split, oil-dressed, and mechanically sueded. Artificial chamois leathers are made from sheepskins tanned with Formaldehyde or Alum then impregnated with oil and sueded. Synthetic chamois cloths are made from polyvinyl alcohol fibers. 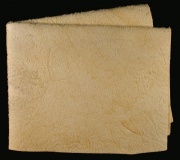