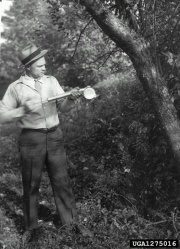 Common abbreviation for the Insecticide dichlorodiphenyltrichloroethane that was first synthesized in 1873. By 1939, Dr. Mueller discovered that the colorless, odorless crystals are toxic to insects, humans, and animals. Its successful use during World War II to combat insect carried diseases resulted in a Nobel Prize award to Dr. Mueller. In the United States, DDT was widely used as an insecticide in agriculture. Unfortunately, it was also used on many museum objects, such as plants and animals in ethnographic collections, as well as books and papers in libraries. Residues have also been found on wooden artifacts and musical instruments in museums. DDT is nonbiodegradable and its residues (DDE and DDD) may remain in or on objects for years. The breakdown of DDT may be catalyzed by some metals (Aluminum, Chromium, and Iron) and accelerated by light and heat. It was banned for use in the U.S. in 1972.