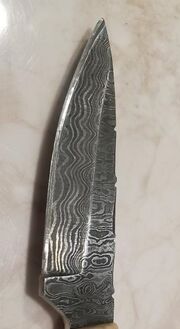 A very strong, hand-wrought Steel made in Near Eastern and Asian countries from approximately 900 to 1600 CE. Damascus steel was primarily used for sword blades from ingots of Wootz steel either imported from Southern India or made in production centers in Sri Lanka, or Khorasan, Iran. The heterogeneous metal mixture of Iron and steel that was drawn out, folded over, and then welded many times producing wavy patterns in the steel which were enhanced with acid etching, producing their distinctive patterns of banding and mottling reminiscent of flowing water, sometimes in a "ladder" or "rose" pattern. The blades were reputed to be tough, resistant to shattering, and capable of being honed to a sharp, resilient edge. Tales have indicated the blades could cut through a falling hair. The original methods, techniques, and materials are thought to have been lost.

However, due to extensive analysis and experimentation, several individuals in modern times have successfully produced several pattern forming hypereutectoid steel blades with visible carbide banding on the surface, consistent with original Damascus Steel. One method the "Damascus" surface pattern used a steel melt comprising about 1.0 to about 2.0 weight % carbon is solidified to form an ingot, the ingot is heated between about 1100 DEG to about 1299 DEG C. for a time at temperature of about 5 to about 12 hours to form a malleable metal. Multiple heat, drawing and folding techniques have produced multiple patterns such as waves, droplets, and feathers. 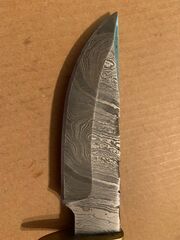