The colorless proteinaceous fluid (Albumin) surrounding the egg yolk of bird eggs. Egg white is approximately 85% Water and 12% Protein with small amounts of Fat, carbohydrates, and salts. The distribution of major amino acids is: Glutamic acid (13.9%), aspartic acid (10.5%), Leucine (10.3%), lysine (8.0%), valine (8.3%), arginine (6.8%), Alanine (6.3%), isoleucine (6.2%) and serine (5.8%) with no measurable amounts of Hydroxyproline (Mills and White 1994). This proteinaceous mixture is chemically known as albumin but has been commercially spelled as Albumen when used in food and as a binder for photographic emulsions. Albumin forms an amorphous solid when dried that is soluble in water. However, egg white is heat sensitive and forms an insoluble irreversible mass when heated to temperatures above 60 degrees centigrade. Egg white was used as a paint medium, called Glair, in illuminated manuscripts. It was also used in gilding for Bole and for Shell gold or powdered gold applications. Albumen was as an Emulsion medium in mid-19th century photographic and lithographic prints. Egg white is also used for baking, textile dyeing, clarification of wines, and as an adhesive, coating, and binder. Medicinally, it is used as an antidote for Mercury poisoning. 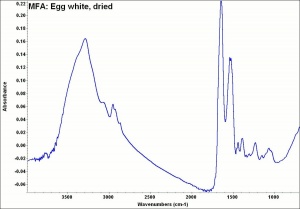