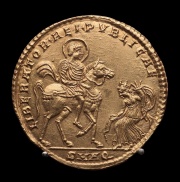 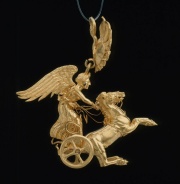 A soft, inert, shiny yellow metallic element that is beautiful and easy to work. Gold has been highly valued and used for artifacts since before 5000 BCE. Alluvial deposits were used in Iran, Turkey, Egypt, Greece, India, and China. In medieval Europe, most gold was obtained from Saxony and Austria. Major gold deposits have been found in South Africa, Columbia, Australia, Russia, Canada (Yukon) and the U.S.(California). Native gold, found in quartz veins (vein gold) and alluvial deposits (placer gold), generally contains some Silver and Copper. The present main world producers are : China, Australia, United States, Russia, South Africa, Peru, Canada, Indonesia, Uzbekistan, Ghana. Gold is purified by dissolution in Mercury or cyanide solutions, by melting, or by electrodeposition. The purity of commercial gold is expressed in karats which is the number of parts of gold in 24 parts of the alloy. Gold is extremely malleable and can be pressed into a continuous film of 0.1 micrometer thickness. Gold is primarily used for monetary systems and for jewelry. Other uses for gold include conductor in electrical devices, dentistry, as a pigment in paints and ceramics and for gilded decoration. 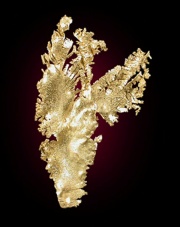