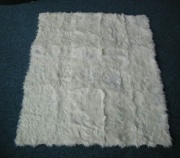 The tanned skin from a young sheep. Lambskin is lighter in weight than sheepskin. Vegetable tanned lambskin was used as a bookbinding leather in the second half of the 19th century. It was valued for its softness and blemish-free surface. Lambskins obtained from Tuscany were highly valued. They were used to make doeskin and chamois. Lambskin, obtained shortly after shearing, is also prepared with the fleece intact and used for soft, warm clothing, and padding.