A brownish-black synthetic pigment composed of Manganese dioxide and/or other black manganese compounds such as jacobsite (MnFe2O4). Manganese was first used as a Ceramic Glaze in the Near East as early as the seventh millennium (Schweizer and Rinuy 1982). It was prepared from Manganese ores and fired to produce a dark brown to black glaze. As a paint pigment manganese black was patented in England in 1871 by Rowan. It is was never commonly used, but is sometimes found in inexpensive house paints and as a Drier in artists oil paints. 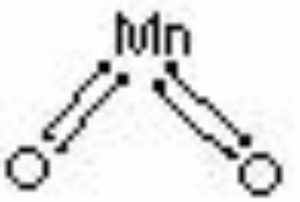 Inhalation can cause a flu-like illness. Ingestion may cause nausea and hypoglycemia.