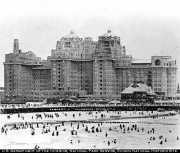 A type of hydraulic cement that hardens under water. Portland cement was patented by Joseph Aspdin of Leeds, England in 1824. It was called portland cement because it resembled the grayish colored building stone obtained from the Isle of Portland, England. From 1865, it was imported to the U.S. from England until manufacturing began in 1872 in America. Portland cement is made from limestone mixed with clay then baked in a kiln (1300-1500 C) until it partially vitrifies. The resulting product (Calcium silicate) is powdered for use as a cement. Portland cement sets to a hard impermeable solid when mixed with water. Analysis indicates that the cement contained 60-64% Lime, 20-24% Silica, 6-10% Alumina, and 3-5% iron oxide, with small amounts of Magnesia, Sodium, Potassium, and Sulfur. Portland cement is often mixed with aggregated to form mortar and concrete. It is resistant to water and has been used as a fill for large voids in outdoor sculptures (Thornton, 1988). Portland cement has been used for skyscrapers, dams, bridges, roads, and other structures.

Currently, in the U.S. five types of portland cement are standardized by the American Society for Testing and Materials (ASTM):