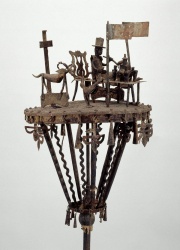 An insoluble dark red powder that occurs naturally as Hematite. Red iron oxide has been used since antiquity as a permanent red pigment in paints and glazes (see Red ocher). In the late 1700s, ferric oxide was manufactured as a red pigment. This synthetic, intense red pigment with a uniform particle size is now called Mars red. Ferric oxide is also found in the form of Rust. Rust is a corrosion product that readily occurs on Iron and some steels in the presence of Oxygen and moisture. Fine powdered ferric oxide, called Jewelers' rouge, is also used as an Abrasive for Glass, precious metals and diamonds. Ferric oxide is also the most common material used in magnetic coatings on audio and video tapes.

Soluble in acids. Insoluble in water.