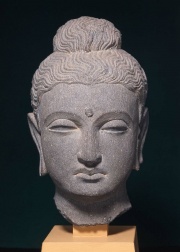 A group of medium-grain, metamorphic rocks that have parallel layers of lamellar minerals, such as Mica, Chlorite, Talc, Hornblende, and Graphite. Quartz is often present as a secondary mineral. Schists are formed at high temperatures from Shale, Clay, or Mud. They cleave easily along the foliated planes. Schists are usually named for their predominant mineral constituent, such as mica schist, hornblende schist, chlorite schist, and talc schist. The exception occurs when a schist is named for an unusual mineral constituent such as Garnet schist, Tourmaline schist, and Glaucophane schist.