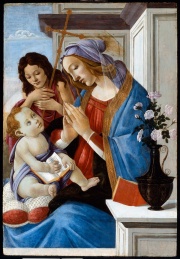 A water thinned paint that dries to a water resistant film. Egg tempera is an aqueous emulsion paint with an egg yolk or whole egg binder that originated in medieval Europe. These paints dry to a semi-matte appearance by the evaporation of water and the coagulation of the egg protein. After about 1400 CE, variations of tempera were made with egg/oil, gum/oil, glue/oil and other emulsions as artists began to experiment with drying oils. As linseed oil paints became popular at the end of the 16th century, tempera died out. It enjoyed a revival near the end of the 19th century when Cennino's treatise was published.