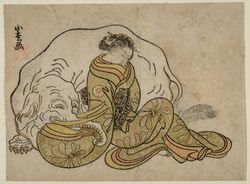 On a print the color white is usually unprinted paper, however, sometimes lead white was used to set apart fields of white from the paper's natural tone. More frequently, it has been found mixed with other colorants, in order to lighten a color or lend opacity. Most frequently, it appears to have been mixed with red lead to create a light pink color, often seen in wooden architectural elements. Sometimes lead white paint was spattered across the surface of a complete print in order to approximate the appearance of snow or sea spary. Darkening of lead white has been observed in areas where it was printed alone and in mixtures. It is often this discoloration or darkening that leads to its preliminary identification of its presence. Unlike red lead, it appears that printers did not intentionally initiate darkening of this color in order to create a special effect.

X-ray fluorescence analysis (XRF) is used to detect lead, which in a white area, is an indication for the presence of lead white (2PbCO3·Pb(OH)2).

Other Images of Lead white

Below is a list of prints where lead white was detected.

The following 17 pages are in this category, out of 17 total.