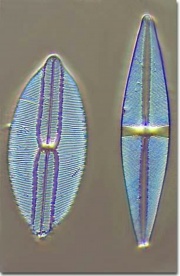 An absorbent powder composed of the siliceous skeletons of microscopic water plants called diatoms. Diatomaceous earth is composed of 88% Silica. The soft, whitish material is used as an inert Pigment or Filler in Paper, Paint, Brick, floor tiles, ceramics, Linoleum, Plastic, Soap, Detergent, and a large number of other products. It reduces Gloss, acts as a suspending agent, and increases viscosity. It absorbs dyes well and has been used as a base for lake colors. Diatomaceous earth is also used as an Absorbent, and Poultice since it can absorb up to 4 times its weight of water. Because of its water-absorption capabilities, it is used as a desiccating Insecticide and is often mixed in formulations with pyrethrins. Diatomaceous earth has also been used as a decolorizer and filtration aid for purifying oils, fats, and waxes. Diatomaceous earth has replaced Asbestos as an Insulation for boilers, blast furnaces, because it is more resistant to shrinkage and does not fail at high temperatures. Other uses include Sound insulation and as a very mild Abrasive in metal polishes and toothpaste.

Soluble in alkalis. Insoluble in acids except HF.