Any of several Iron alloys (i.e., steels) made corrosion-resistant by the addition of Chromium. Austenitic stainless steels, developed by E. Maurer of Germany in 1909, contain about 12-18% Chromium and 5-8% Nickel. These alloys harden by cold working and are most often used for structural work. In 1911, C. Dantsizen of Germany developed ferritic stainless steel. This low carbon chrome alloy was used for turbine blades. It contains about 10.5-27% chromium with small amounts of Molybdenum, Aluminum, Titanium, or Nickel. In 1913, martensitic stainless steels were discovered by H. Brearley of England. Containing 11-18% chromium with about 0.35% Carbon, they are used for cutlery and munitions. Stainless steel can be polished to a high shine either mechanically or by an electrolytic process. It is hardened by cold working and is resistant to heat. From 1930s to 50s, stainless steel was popularly used for exterior and interior construction and decoration (dome of the Chrysler building, countertops, soda fountains, automobiles, stoves). Later, it was commonly used for framing, hardware, roofing, gutters, screws and nails. Various stainless steels may contain small amounts or other additives such as nickel, Columbium, molybdenum, Phosphorus, Selenium, Silicon, Sulfur, titanium, and Zirconium. 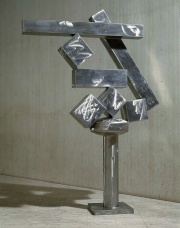