A natural red dye extracted from a small redwood tree, Haematoxylon campechianum, indigenous to Central America, Mexico and the West Indies. The dye is contained in the heartwood of the tree; the wood is cut into blocks and sold directly or further cut into chips. Occasionally the wood pieces were used in marquetry. The primary water-soluble colorant, Hematoxylin, oxidizes to form the reddish-brown metallic crystals of hematein that are insoluble in water. Using a variety of mordants, the red extract can be prepared as a lake ranging in color from dark blue (Chromium or Copper), violet-blue (Alum or Tin) to black (Iron). Logwood was used in black inks (Iron gall ink and bichromate ink) and watercolors. It is still used as a black dye for textiles and Leather. Logwood dye was introduced in Europe by the Spainards in the 16th century. Because of poor lightfastness, Britain banned the use of logwood from 1581 and 1662. The ban was lifted about 100 years later when it was shown that mordents could make the color more stable. Logwood became an important dye because it was inexpensive and covered a wide color range. It is not used as an artist pigment because of poor lightfastness. 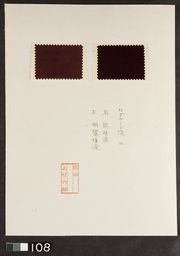 Will discolor with alkaline treatments. Large amounts are poisonous.