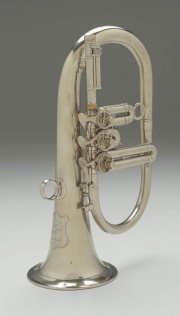 A silvery white alloy composed of Copper (52-80%), Zinc (10-35%), and Nickel (5-35%). Originally produced in China, nickel silver was first manufactured in Germany in 1770; the process was later perfected in 1823. It was used as an inexpensive, non-tarnishing substitute for Silver. Nickel silver can take a high polish and became popular during the 19th century for tableware and plated articles. As an example, the process chart for the Reed & Barton Factory in 1880, shows that nickel silver was one of three alloys used for casting (Gibb 1943, p. 268). Because it provides a harder, stronger, and more durable base than copper, nickel silver is still used as a base for many silver-plated items (marked EPNS-electroplated nickel silver). It was also favored for use in ferrules of expensive artist brushes. Other favorable characteristics are that nickel silver is ductile and nonmagnetic. It can be wrought, cast, rolled, stamped, extruded, and machined. The addition of small amount of lead allows nickel silver to be soldered and welded. Beginning in the 1920s nickel-silver became popular for interior and exterior architectural motifs such as decorative panels, stair railings, elevator doors, plumbing fixtures, hardware, and decorative strips in terrazzo floor designs. By the 1950s, it was rarely used as an architectural element.