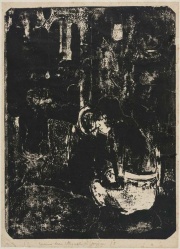 A bluish-white, lustrous metallic element. Zinc occurs with an abundance of 0.02% in the earth's crust in the minerals Smithsonite (ZnCO3), Sphalerite (ZnS), Zincite, Willemite, and Gahnite. Zinc was discovered in prehistoric times and it was first isolated from the ores in India in the 13th century by the reduction of Calamine. China was mass producing zinc by the 16th century. In Europe, commercial production began after techniques for its isolation were discovered by Andreas Sigismund Marggraf in Germany in 1746. The present major mining producers are : China, Peru, Australia, United sates, Canada, India, Kazakhstan, Bolivia, Mexico, Ireland. The malleable metal is ductile at 150 C, but becomes so brittle at 180 C that it can be powdered. It is most commonly used as an anti-corrosive galvanized coating for other metals. Metallic zinc is also used in alloys, such as Brass, to increase workability. Zinc oxides are used in artists pigments, photocopiers, sunscreens, and antiseptic ointments. Zinc sulfides are used as phosphors in cathode ray tubes. Zinc containing pigments include Zinc white, Zinc yellow, and Lithopone.