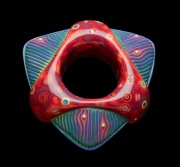 PVC is resistant to moisture but stabilizers are needed to prevent discoloration from light and heat. Lightly plasticized PVC has been used for gramophone records. Heavily plasticized PVC is used as a rubber substitute for thin sheeting, wire coverings, gaskets, tubing, raincoats, storage sleeves and fabric coatings. Phthalate plasticizers were commonly used in the middle of the 20th century for PVC plastics. However, these oily plasticizers tended to creep and separate with time producing an oily surface and leaving a brittle substrate so some more recent PVC formulations use copolymerization techniques for film modification rather than plasticizers. Rigid unplasticized PVC was introduced in 1958 in Europe as alternative piping for town water services to replace corroded iron pipes. Artificial leathers, such as naugahyde (developed in 1936), became popular in the 1960s and 70s for use as upholstery. 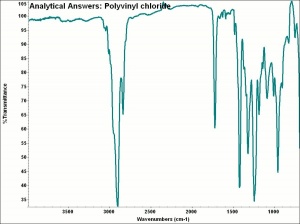 Plasticizers and stabilizers may phase separate and ooze from polymer resulting in the formation of an oily film, white bloom on the surface of the material. This coating may corrode metal or transfer to objects nearby. The materials themselves may suffer discoloration, distortion, embrittlement and cracking.

Greg Smith and Michael Samide report that some rigid, unplasticized PVC construction boards give off a sulfur containing heat stabilizer (2-ethylhexyl thioglycolate [2-EHTG]) that can tarnish silver (publication forthcoming). However, they also reported finding several specific brands of PVC construction board, namely Komacel (Kommerling) and e-PVC (3A Composites) are safe for use in exhibition casework as they do not contain 2-EHTG.