A general name for stalks from cereal grain plants, such as Wheat, Barley, Rye, Oat, and Rice. Since ancient times, straw fibers have been woven or braided to form hats, bags, shoes, mats, and baskets. Straw was also used for papermaking in ancient China. It was the primary fiber used for paper in Europe and North America from the 18th century until the 1920s when it was replaced by wood pulp. Straw pulp is still used for strawboard, printing paper, wallpaper, and inexpensive wrapping papers. 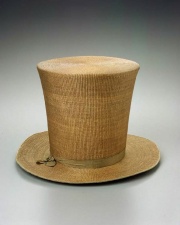