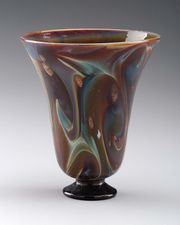 A variegated Glass made to imitate the colored band patterns of natural Agate. Agate glass is made by layering different colored glasses, usually of varying thickness, then fusing them into a single block. The cross section of the block is then cut or ground to simulate natural agate.A similar glass, called, calcedonio, was made by Venetian glass-blowers to simulate chalcedony. The;y combined threads of variously colored glass to create richly colored stones that includes agate and Onyx. Additionally, inclusions of small metallic glitter was added to simulate Aventurine, another gemstone.

Agate glass techniques are commonly used for marbles (decorative glass balls). Developments of new manufacturing techniques in the early 20th century, led to the creating of the agate glass ashtrays, cream jars, vases, and flower pots. The glass products were discontinued in the 40s due to the popularity of plastics.