A variety of Agate that has parallel, alternating bands of Chalcedony and Opal. The bands are usually colored black/white or red/white. In ancient times, the stones were available in Egypt, Arabia, and India. Onyx was often used as a gemstone in the production of cameos and intaglios. Onyx is also used as an ornamental building stone and for decorative items such as table tops, lamp bases, and small boxes. It was popularly used for geometric patterns in Art Deco designs of the 1920s. Limestone onyx, also called onyx marble, dark layers of impurities and polishes to a high gloss. Mexican onyx is a banded limestone made from stalactites. Argentine onyx is a dark-green stone. Sardonyx has layers of sard (red carnelian) alternating with lighter-color layers of onyx. 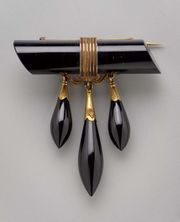 Inhalation of dust may be toxic resulting in silicosis.