A colorless, crystalline powder that is a strong organic acid. Oxalic acid was first discovered in the extract from the wood sorrel plant. It also occurs naturally in rhubarb, spinach, beet leaves, Swiss chard, chocolate, cabbage, sweet potatoes, peanuts, cranberries, strawberries, and bell peppers. Additionally, several species of aerobic bacteria (Penicillium and Aspergillus), molds, and Lichen excrete oxalic acid as a metabolic product. It is also a component in Air pollution and Acid rain. Oxalic acid is synthetically made from Sawdust or by treating Carbon monoxide with Sodium hydroxide. Oxalic acid has many roles as a bleach, metal polish, stain remover, and mordant. It is used as a Bleaching agent for Straw hats, Leather, and Wood. Oxalic acid acts as a reducing agent for metal oxides to remove tarnish as well as rust or ink stains. It is used commercially as a laundry rinse, wood-bleaching agent, and calcium remover. Oxalic acid can remove some paints and varnishes. It is also used as a mordant in dyeing textiles and in the manufacture of Ink. Oxalic acid was used in the toning solution for black and white photography. Since at least the mid-19th century, oxalic acid has been used on works of art: to remove Rust and ink stains as well as to bleach leather, wood, papers, stone, and textiles; and to clean encrustations from wall paintings, ceramics, and sculptures. However, these treatments can leave oxalate residues that are difficult to distinguish from naturally occurring residues due to microbiological growth or air pollution. More recently, oxalic acid has been used as a mild hydrolysis agent in the preparation of natural dyes for HPLC analysis. 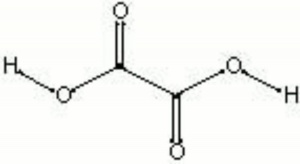