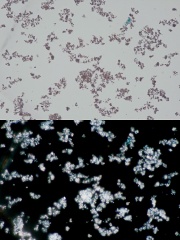 Although the name titanium white can refer to any white pigment containing a titanium compound (such as titanium lithopone), the most important titanium white pigments are the synthetic products consisting mainly of Titanium dioxide, either as the pure compound or as a composite, often with Barium sulfate or Calcium sulfate as a base; in some cases, surface coatings are applied to achieve certain properties. Two of the three crystal forms of titanium dioxide, Anatase and Rutile have been developed as white pigments. Although ground mineral rutile was used as a colored pigment, the industrial processes required to produce white anatase-based pigments were developed from about 1910 onward, and companies were formed in 1916 in Norway (Titan Company A/S) and in the United States (Titanium Pigment Company) which were in full scale production by 1918 and 1919, respectively. Composite pigments were easier to produce than pure anatase; one anatase pigment containing 83% titanium dioxide was produced in Norway in 1918, but it was discontinued in 1919 in favor of composites. Pure anatase pigment was first commercially available in France in 1923 and after 1926 in the United States. Rutile pigments had better hiding power and weathering characteristics (less prone to chalking), and laboratory scale products patented in 1931 in Europe and the United States underwent development until commercial production began in 1937.

Titanium dioxide is a very stable compound with a high refractive index, its high hiding power making it eminently suitable for use in paint; in the 1920s, the requirement in many countries to find an alternative to the toxic Lead white contributed to its uptake in the industry. In addition, it has been used in pastels, inks, paper, enamels, ceramics, glass, leather treatments, textiles, rubber and plastics. Artists' paints labelled as titanium white may contain other white pigments, often Zinc white, as well as fillers. 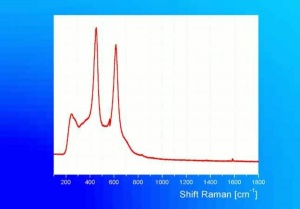