A synthetic pigment composed of Lead antimonate yellow, which is produced in colors ranging from lemon yellow for the very pure pigment to darker shades. Naples yellow pigments with a greenish, pinkish orange, or reddish tinge have been produced; the color depends on the method and temperature of manufacture. It has been used as a colorant for glass, ceramic tiles, and paint for at least 3500 years. Lead antimonate yellow has been identified in objects from Egyptian, Mesopotamian, Babylonian, Greek, Roman, and Celtic cultures. In Western European art, Naples yellow has been used in Majolica pottery glazes since about 1500 and in paintings dating from about 1600. It was most frequently used during the period 1750-1850 after which it was gradually replaced by other yellow pigments. Naples yellow is a synthetic pigment with the chemical formula, Pb2Sb2O7. It has a crystal structure similar to the mineral bindheimite; the naturally occurring mineral is not used as a pigment however. Since other yellowish minerals occur on Mount Vesuvius near Naples it seems plausible that this association might explain the name "Naples Yellow." There is yet no documentary or analytical evidence to support this hypothesis. The raw materials and manufacturing processes for making zalulino (another name for lead antimonate yellow) were first published in 1556 by Cipriano Piccolpasso of Castel Durante, Italy, in his treatise Le Tre Libri dell'Arte del Vasaio (The Three Books of the Potter's Art). In 1758, Giambattista Passeri published very similar recipes for the pigment giallolino. Piccolpasso's recipes call for heating a mixture of Lead, Antimony, Lees, and Salt. Scientific studies of Naples yellow include those published in France by Auguste-Denis Fougeroux de Bondaroy (1766) and Léonor Mérimée (1839) and in Switzerland by Karl Brunner (1837). Before Naples yellow came into widespread use in the 18th century, Lead-tin yellow was the pigment most used by artists in Europe starting in about 1300. Lead-tin yellow was rediscovered in 1941 by Richard Jacobi of the Doerner Institut, Munich using x-ray diffraction analysis. Until then, it was not generally understood that there were at lease three distinct yellow pigments composed of lead compounds: lead antimonate yellow, lead-tin yellow type I and lead-tin yellow type II. More recently, scientists have found pigments which made of lead-antimony-tin oxide compounds. Genuine Naples yellow continued to be sold during the 20th century but the name "Naples Yellow" came to indicate a color shade that is commercially produced by mixing together other pigments, such as Cadmium yellow, Zinc white, and Venetian red. Naples yellow is lightfast and chemically stable, but may darken with high temperatures, or exposure to Iron compounds or Sulfur fumes. 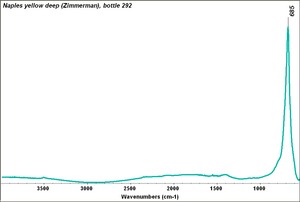 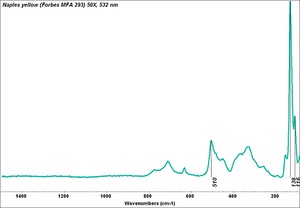 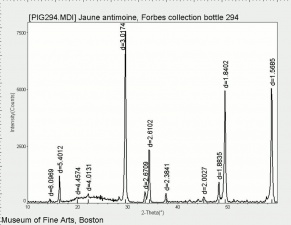 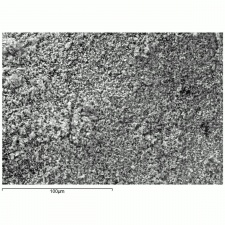 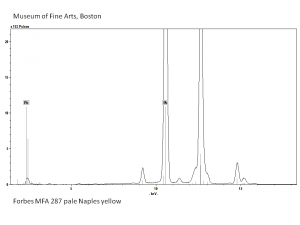