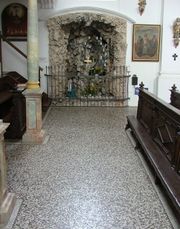 A durable floor surface composed of granulated stone set in a cement or a synthetic resin matrix. Based on ancient mosaic methods, terrazzo was introduced in the United States in the late 1890s. However, it was rarely used until 1919, when a method was developed to subdivide the floor using metal divider strips (Brass, Copper, Nickel, Silver, or Zinc). This method minimized cracking due to expansion or settling. It also added numerous decorative design options. By the late 1930s, terrazzo was a popular flooring for high traffic areas such as hospitals, bus stations, airports and schools. Terrazzo floors are typically made of 30% Portland cement mixed with 70% stone chips, such as Marble, Onyx, Travertine, or Serpentine. Occasionally coarse particles of aluminum oxide (Alundum® or Carborundum) were added for texture.

Can be etched or pitted with acids and alkalis